SIMONIT & SIRCH in the vineyards of Hennessy world leader in cognac!

The collaboration is part of the Maison's policy to combat vine wood diseases. After Ch

From the great Maison of wine to cognac. The SIMONIT & SIRCH group has been called as a consultant by Hennessy, the world leader in the cognac market. Based in Cognac, in the west of France, Hennessy was founded in 1765.

Today the Maison, which belongs to the LVMH luxury group , is the first cognac producer in the world.

Maison Hennessy has been engaged for many years in research to combat wood diseases. This commitment develops on two horizons. Long term : the Maison is associated with INRA-Bordeaux Sciences Agro and Agence Nationale de la Recherche through the Unité Mixte de Recherche SAVE Santé & Agréologie du Vignoble. This project, started in 2015, was expanded and consolidated in 2016 with the creation of a GTDfree task force to find the best cultivation practices (including the best pruning) to reduce wood diseases. Short and medium term: Hennessy is experimenting with new pruning practices on its 180 hectares of vineyards that limit the onset of wood diseases. The purpose is twofold: to test and validate them and, at the same time, to transmit them on the field to the staff involved in this operation. The goal, over time, is to make the techniques tested here available also to the Maison's 1,600 wine growers.

SIMONIT & SIRCH has been supporting Maison Hennessy for three years in pruning the vines of Ugni Blanc , from the distillation of the grapes whose cognac comes from. This vine, equivalent to the Italian Trebbiano Toscano and cultivated in the Charente, is particularly sensitive to wood diseases and in particular to bait. The group operates on two levels. Development and research of a pruning method that allows to strengthen the vines to reduce the onset of wood diseases: the team intervenes, mainly from December to February, both to define the pruning method to be implemented and to train pruners. Participation in projects aimed at devising the management of new wine plants in the context of current climate change.

"I am very honored that the Maison Hennessy turned to us - says Marco Simonit, CEO SIMONIT & SIRCH - and I thank the LVMH group, which invests more and more in safeguarding its extraordinary wine heritage. After Château d'Yquem, Moët & Chandon and Terrazas de los Andes, we are fortunate to have collaborated for three years with Maison Hennessy. "

Founded about thirty years ago by the Italians Marco Simonit and Pierpaolo Sirch, with headquarters in Friuli Venezia Giulia and branches in Bordeaux, Napa Valley, South Africa, SIMONIT & SIRCH is the only international group specialized and accredited in the field of staff training. manual pruning of vineyards. The team works in the main wine-growing districts of the world, where it is a consultant to 150 of the most prestigious companies and collaborates with many of the most renowned wine research institutes and universities. It teaches the SIMONIT & SIRCH branch pruning method (which reduces the devastating impact that cuts have on the lymphatic system of the plant due to the internal desiccation they cause), which can be adapted to all forms of vine growing. In 2009 he created the Italian School of Vine Pruning, which today has around twenty locations. In 2016 he established the DUTE Diplôme Universitaire de Taille et Épamprage in Bordeaux, in collaboration with ISVV, the only university diploma in the world of pruning and sprout selection. Marco Simonit has published two Vine Pruning Manuals, dedicated to spurred cordon and Guyot. The French version of the latter, "Guide pratique de la taille Guyot - Prévenir les maladies du bois", in 2018 won the OIV 2018 International Prize in the Viticulture section.

Leader in the cognac sector, Maison Hennessy has been shining worldwide for over 250 years with exceptional know-how. Born from the conquering spirit of its founder Richard Hennessy, the brand is present in over 160 countries. Anchored in the heart of the Charente, the Maison is also an important and committed protagonist of the regional economy and is fully involved in promoting the cognac sector. The success and longevity of the house are based on the quality of its cognac, derived from a process that is handed down from generation to generation, unique in its kind. The first ISO 14001 certified liqueur production house in 1998, Maison Hennessy mobilizes its capacity for innovation and all its partners, protagonists of the supply chain, to preserve this exceptional terroir. Flagship of the LVMH group, it is one of the main French exporting companies. It exports 99% of its production and contributes to the importance of France internationally. 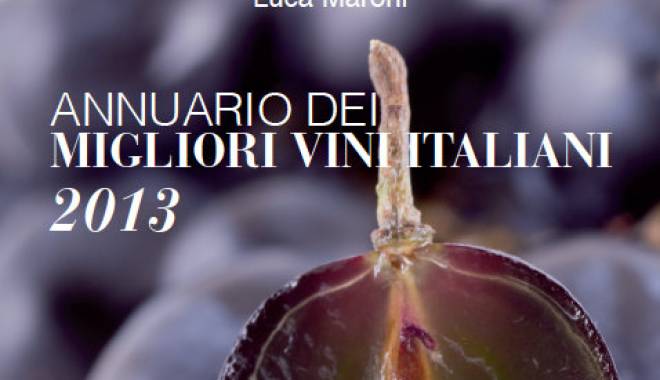 What is The Annuario dei Migliori vini Italiani 2013? It is the only publication whose evaluations are based on a scientific, simple, direct tasting method created in 1995 by Luca Maroni. Luca Maroni's ANNUARIO DEI MIGLIORI VINI ITALIANI 2012: the most analytical and methodological publication on Italian wines. It presents the best of Italian wine production, focusing on superior quality wines with relevant organoleptic characteristics. What kind of method does he use in tasting? The method is shareable by anyone and it is based on the logical principle that the Quality of a Wine equals the Pleasantness of its Taste. The method is clearly illustrated and explained on the first pages of the Annuario and its plain reading develops evaluation abilities of anyone. In one volume: the most important wine producers (1.993 Italian wineries, evaluated wine by wine) and 11.301 tasted wine evaluations. 1.368 pages Tasted wines: 10.867 between white, red, rose', sweet and sparkling wines Producers: 1.879 wineries 43.468 tasting assessments 143 pages of indexes 32 pages of statistics and rankings source: Luca Maroni website

Condividi:
SIMONIT & SIRCH in the vineyards of Hennessy world leader in cognac!