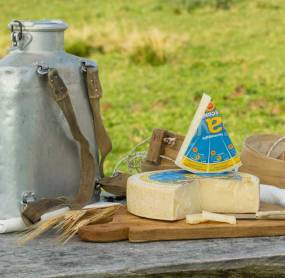 A YEAR OF AWARDS: SPARKLING BALANCE FOR PIAVE DOP CHEESE

Three stars at the Superior Taste Award and three medals at Caesus Veneti 2020. An excellence recognized in Italy and abroad.

From Caesus Veneti 2020 to the Superior Taste Award, 2020 was a year full of satisfaction and awards for Piave PDO cheese, awards that are added to a palmares already full of medals, testifying to the excellence of this special product Dolomites, much appreciated in Italy and beyond the border.

But let's take a step back and retrace these two prestigious awards that once again pushed Piave PDO cheese into the Olympus of the most loved cheeses by experts and everyday consumers.

Superior Taste Award: "Exceptional Taste", to this correspond the three stars won by the Piave DOP Vecchio Selezione Oro in the 2020 edition of the Superior Taste Award, the prize awarded in Brussels every year by the Interantional Taste Institute thanks to the fine work of a jury formed by over 200 experts.

Piave cheese has thus won the highest recognition for the fifth time in a row, a position that has allowed it once again to be appreciated and recognized internationally as a cheese capable of striking the most refined palates in the world.

But how are the products evaluated? One of the award judges, Stijn Roelandt, - sous-chef of Hof van Cleve, 3 Michelin stars, says that "it's a rigorous process. The products are tasted blindly : we don't see the packaging and we don't know the brand or the name of the producer, we don't even know which country it comes from. This forces us to be completely objective while doing the sensory analysis. Only really good products are certified. "

Caesus Veneti 2020 : the highly appreciated regional competition that rewards the best cheeses of Veneto once again saw the Piave DOP cheese as protagonist, which, among over 400 dairy excellences, was able to win the opinion of the two juries coordinated by Onaf Master Tasters: that Aurea made up of journalists, chefs, food and wine and bloggers and the Popular one made up of consumers and visitors.

In this edition, Piave PDO cheese was awarded three prizes:

Both the Aurea and the Popular jury nominated it "Best PDO aged cheese" . In addition, he was awarded the recognition of "Best cheese made in the mountains" with the highest score by the technical commission coordinated by Veneto Agricoltura.

"It was a difficult year, but full of satisfactions" comments Chiara Brandalise, Director of the Consorzio di Tutela "we have obtained prestigious results that reward the raw materials used for the production of this excellence and the territory from which they come. Piave cheese makes everyone agrees and continues to be successful both nationally and internationally "

To learn more about the awards won by Piave PDO cheese> https://www.nicetoeat.eu/il-formaggio-piu-premiato

The Protection Consortium promotes Piave PDO cheese and the dissemination of correct information on the specific features of the product, as well as on and offline communication to promote knowledge and expand its consumption. It is possible to follow the Consortium and the Nice to Eat-EU project on Instagram @nice_to_eateu, Facebook @NiceToEatEU (FB) and YouTube (on the homonymous channel) and with the official hashtag #Nicetoeateu, as well as on the website www.nicetoeat.eu